Some of my earliest and fondest memories are inextricably linked to food. The first was tomatoes. Apparently, at age three or four I was allergic to tomatoes. But as soon as the adults at grandma's house looked the other way, I was in the garden, binge eating tomatoes. I returned, feigning innocence. They asked if I had been eating tomatoes. Again. I shook my head and lied with the truth brandishing itself upon my welted face. Salt and sugar followed soon after. When I was seven, dad would buy doughnuts on Saturdays that looked like baked potatoes. In retrospect, I am fairly certain that the filling was corn syrup-laced whipped hydrogenated shortening with big rough squares of sprinkly sugar on top. We weren't often allowed to have much sugar, so this of course was the best day of the week. They were pure magic.

When I was eleven or twelve, I could be found baking cream puffs shaped like swans, barbequing chicken legs, and eating carp sandwiches on white bread. No one would eat carp besides me and grandpa. He cleaned it out in the back yard on a tree stump with a really sharp knife. Scales flew. They were fat, dirty, bottom feeding fish that he caught in the Kickapoo creek. But we shared a similar affection for the taste. In walks through the yard he would cut open green apples with his pocket knife and dust them with salt. It completely changed the taste. In an instant I knew the power of salt but was too young to know that this was bonding. Our family would find piles and piles of morel mushrooms in the nearby woods, propping them up next to Winston cigarette packs for size comparison.

That's a morel, not a mitten.
I was entranced, yet unaware that we were eating a prized and much sought after delicacy. Grandma dredged them in cornmeal and fried them in a big cast iron skillet, with only the occasional grease fire.

My first real restaurant job was at Nature's Table. It was a funky, pulsating, character ridden joint. It smelled of baking bread and Anchor Steam. There was live music every night. Rosie taught me how to peel garlic. You take it apart, smash it with the back end of your knife, and the skin just peels off! This woman was clearly a genius. We put loads of garlic in everything. Terry would make us eat raw garlic daily and take ginseng shooters. When I showed up for my afternoon classes, heads would turn. I reeked of garlic followed by a pleasant waft of fresh baked bread. After the Table closed, I had a brief stint as a cocktail waitress.

I was meant to be in the kitchen. The universe has a funny way of playing jokes on you when you have made the wrong choice. As a Doc Martens combat boot wearing girl, the miniskirt alone was fairly intolerable. Eighty year old men would slap my ass and laugh and there was nothing I could do about it, other than “accidentally” drop my tray of drinks on their face. I had a particularly terrible table of six. They were a family of grifters or cons or what have you. They ordered two of the most expensive steaks on the menu, among other things. They ran me back and forth for soda and water and pointless condiments. When I brought the entrees, they began eating, yet informed me they had only ordered one steak and would not pay for both. I was in the back crying. My boss asked me what happened. He took the substantial bill out to their table. He ripped it up in front of them. You will not treat my employees in this manner. And you will never come back here again. Relieved but still crying, he asked me if I wanted a valium. No, I whimpered. I wasn't sure what valium was, but I will never forget what he did for me.

The kitchen door hides more than you would imagine. My college roommate Suzanne and I got our first fancy restaurant job. We had to take a food knowledge test and everything, so you have had to be qualified to work there, right? It was Cajun themed, about to open in the old train station in downtown Champaign. We had no idea what we were in for. This was my first realization that the kitchen was a damn scary place. The idyllic Nature's Table realities slipped away. Most of our coworkers were illiterate. We walked in every day not knowing what kind of angry outbursts were in store. We were outweighed and outnumbered by folks that seemed angry at us for no reason. We were sexually harassed. The original chef, from Tunisia, was dismissed. I cannot say for sure that it was because of the torment he caused us. But Suzanne and I certainly felt cornered and threatened by someone who was supposed to be our mentor.

The restaurant was out of control. We would come in to work to find bins of raw chicken dripping into cases of lettuce. Huge pots of red beans would be unattended and scorched so badly the pots would be thrown away along with the smoke laden beans. Burning beans is a sin in Cajun households. The spices had to be locked up. Too many people confused tablespoons with cups of white pepper, effectively macing the kitchen and dining room. The new Chef Tony, Suzanne, and I were the only ones with keys to the spices. Cases of live crawfish would spill over in the hot dark corners onto the greasy floor and the crawfish would escape into the dining room. It occurs to me now how crazy this was. But it was here among the madness that I had a pivotal moment.

He ordered a steak “black and blue.” I had never prepared one before. Thank goodness I was a food nerd, or I would have never even known what it was. My chef was off or gone for the evening. I had no one to ask for advice. I rubbed the steak with kosher salt and coarse pepper. I'm sure my brow was sweating a little.

I think I looked toward the sky or asked for help from the gods of the humming industrial hood. I threw it on the hottest part of the grill. I tossed melted butter over it for some flames, as if it were holy water. I was so nervous. And the steak was sent out. 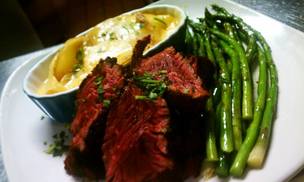 Black and Blue steak, marinated in nerves
I went about my business. A few minutes later, the customer requested my presence in the dining room. I felt sick. I went out to say hello. He stood up to shake my hand and asked me to sit down. He was a chef from Belgium, and a local restaurant owner.  Chef Jean Pierre Vasaune. He said, in a thick accent, I have never before had a steak cooked correctly in this town. Would you like a scotch? I had never had scotch before, but it sounded elegant. We talked for a bit. He became my mentor. When I told him I was considering culinary school, he talked me out of it. He told me to find a chef I admire, and go work for them. You will learn everything you need to know. He happened to be a friend of renowned chef Susan Spicer of New Orleans. Years later, she would change my life as well.

There will always be lessons learned and those gleefully ignored. As newly minted twenty-one year olds, Suzanne and I were throwing our first real dinner party. She was trying to impress this boy in a rock band. We invited him and three boys from the band, including two dreamy redheaded twin brothers. We planned the elaborate menu in fairly ample time, yet did nothing to prepare in advance. We bought wine. Lots of wine. This was the first step since we could now walk into a real liquor store with a legitimate id. We got three, yes three kinds of pate from Art Mart and some baguette. We were grownups. Fancy grownups. We made a batch of $100 bouillabaisse. This was one of our first missteps. Having done any research, we would know that it is a traditional, simple Provencal fish stew made by Marseille fisherman using the bony rockfish they were unable to sell at the market. Instead, we got our hands on the most expensive saffron, scallops, shrimp, mussels, and sea bass we could find. And then there was the duck. We read the instructions on the plastic coating. Turn the oven up to five hundred, get a good crusty outside, and turn the oven down low. Seems easy enough. It will slowly finish as we make the most expensive bouillabaisse known to man.

We had the parts for a pine nut laden salad and Belgian chocolates for dessert. The table was nearly set. The wine glasses shone like beacons in our shitty yet charming dump of a college house on Elm Street. And then, the moment that you notice you are out of butter. We may be novices, but we knew better than to try to host our first dinner party without butter. Heading to Schnucks, it occurs to us that we had cooked with at least one of the bottles of wine. And possibly consumed one more. Stopped to get more wine at the Picadilly by Strawberry Fields. Picked up the butter, more bread, and some Twizzlers. Upon leaving the store, it dawns on us that the duck was still in the oven at 500 degrees. Lesson learned, plan ahead. Or at least plan to plan.

Race stripe duck. The house wasn't on fire but the duck had distinct racing stripes. We doused it with cold butter, covered it with foil, and turned the oven down real low. In cooking, it's not what you can do. It's what you can do with what you have done. It turned out pretty well. The guests arrived. The dinner was very well received. We felt decadently triumphant. It was only later that we realized we had surely bought too much wine. One of the dreamy redhead twins was crying in a corner as the other projectile vomited his portion of the six course dinner in the bathroom. Lesson gleefully dismissed, never put race stripes on a duck, and never make $100 bouillabaisse in the event of projectile vomiting.

Forget that, I would do it again in a heartbeat.

A chef's reality. We are lucky enough to cook with the best ingredients our bosses will let us get our hands on. But few of us can afford to eat them regularly. A typical chef's pantry quite often is a sad, condiment filled wasteland with half eaten Chinese delivery boxes and fossilized frozen pizza. No one ever wants to cook for us, because they think we will critique their skills or technique or palate. People judge me, shaking their heads because I enjoy crap food. I love gringo tacos and bowling alley pizza and gas station hot dogs. And yes, I will make macaroni and cheese with velveeta and morels. You can't stop me. 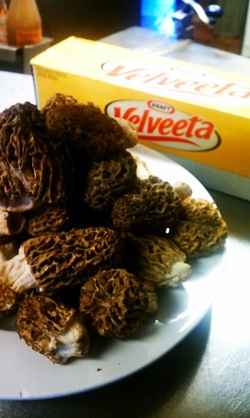 There are two types of occupational hazard at hand. A vast culinary playground often lands me in fat pants. But sensory overload sometimes kills the palate, rendering me useless as a chef. The kitchen is a rough place. We are bunch of short tempered, foul mouthed pirates playing with fire and knives. It's hot and loud and sweaty and greasy. But I wouldn't have it any other way. I didn't choose my career and my passion for food. It chose me.
comments powered by Disqus
Powered by