The Hunger Games of the Academic Market

and the Struggle for Integrity 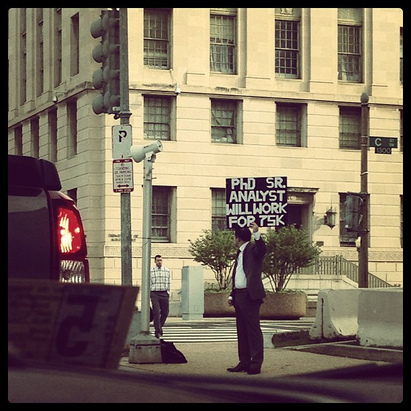 "Will work for 75K #dc #shutdown #jobless" by MiniMax!. All Rights Reserved
This article is not a rant about the demise of the academic market, nor does it aim to “victimize PhDs.” Instead, it asks for the long-term consequences of a market that trains those who should think beyond their private interests to focus on “the self.” When public engagement outside the academe is referred to as a “waste of time” in the pursuit of a job, self-promotion wins momentum and compromises the purpose of the work we do. So far little resistance has met this development and few raise a voice from within the academe. My overall claim, however, is that, of all people, academics are the ones who have the resources at hand to collectively push back against market pressures by reformulating the priorities that currently make the education industry.

Granted, writing about the academe means to write about a position of privilege. When migrant workers around the globe are leaving their communities in the millions to perform unskilled labor in distant countries to make a living, writing about the whims of those in higher education might seem arbitrary at best. However, this disparity in outlook and resources should not keep us from looking the academic market as it is evolving in the US and around the globe, its effects on communities and individuals in it, and its connection to labor more generally. The point is not to argue who is better off because, without a doubt, academics are. Instead, we need to ask in how far the internalization of market criteria changes the very role of the work we do for society at large.

It is not news that the academic market looks bad.  The reasons are complex and simple at the same time. The decrease of funding, on the one hand, increases the need for more graduate students to take over teaching responsibilities of unreplaced faculty members. The consequential overload of potential junior faculty turns into a workforce of underpaid adjuncts that by now “make up more than half of the faculty in higher education, and many of them live ‘on the edge of poverty.’” One recent PhD quite rightly referred to his job hunt as “the Hunger Games,” pointing out that at times 250 people apply for one tenure track position.

And as the availability of jobs decreases, the demands on applicants increase. Publications in renowned journals and conference presentations are a must, and so is the willingness to move across the country, and to leave behind family and communities ties. One recent graduate points out the “structure of the market favors those who do not have a spouse/partner/children.” This, of course, is not unique to the academic market. Still, the family component is often overlooked when hiring in higher education is concerned, and so are the consequences for faculty of color who move to more remote “white” areas of the country. Others report of opaque application processes with little to no communication to those who are applying, and of high teaching loads for less pay.  The numbers speak for themselves and do not need to be discussed here. What is more important is to put them into context.

The Market and its Demands

Some argue that the problem lies with graduate students and PhDs; as one faculty member at the University of Illinois asked me: “Why do you go to grad school if you know there are no jobs?” Similarly, Elizabeth Segran blames PhDs for “choosing to stay in a labor market that is unfavorable to them." The point that PhDs are “produced” regardless of “market demands” is a valid one. It points to the failure of a system that depends on underpaid labor to maintain an education industry that relies on the degree-job exchange.

To put the fault simply onto PhDs, however, is to look at the problem one-sidedly and arguably from the wrong one. Similar to those who argue that graduate students shouldn’t bargain for health care because Walmart employees do not have it, putting the blame game on PhDs simply means to apply a reverse type of logic to the problem at hand. Of course, everyone should have access to health care! Likewise, when Elizabeth Segran emphasizes that loosing one’s “dignity in the process” of pursuing a job in the academe or elsewhere is simply “the norm” and should therefore not be complained about by PhDs, she argues that because different groups of people suffer everyone should. This argument goes along with the idea that the very pursuit of an education should depend on market demand –- both statements take “the market” as the unquestioned norm ruling the destiny of all. By accepting this reality as “natural”, they are apologetic of it. Thus, seen from this perspective, all that is left to do is to redefine the individual’s role in it by putting the burden on individuals rather than looking for systemic solutions, and to argue for universal compliance rather than liberation.

The point, of course, is not to argue that demand is not important. After all, what is the purpose of producing knowledge if it cannot be passed along and made use of? Rather, it lies in understanding that market demand does not exist out of itself. It is created through strategic planning, the allocation of resources and by giving priorities within the education industry to certain interests while leaving out others. Thus, market demand is not a given but it is a symptom for the favored interests that define the purpose and role of education. Needless to say that there has never been “market demand” for critical thinking. In fact, asking for such would mean to write all philosophers, activists and revolutionaries out of history whom we nowadays hail as agents of change. Put differently, if there had been a market demand for the Civil Rights movement and the New Left, we might still have Jim Crow.

“Being on the Market” and Social Responsibility

The phrase “being on the market” is so commonly used among academics that we forget that it implies that we are the product. Subsequent tensions arise when we think of the academe as a community that is about sharing ideas and informing social discourse, of pushing societal boundaries through critical thinking and action. What distinguishes academic work from most other forms of labor, therefore, is its content and purpose. The production of knowledge, and the resources available in its pursuit, supposedly allow for the space to look at the picture at large, not for self-interest but for the improvement of society. This is what justifies the very existence of the academe and what makes academic privilege. 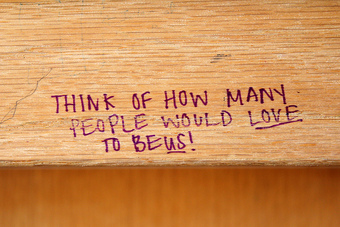 Day 173: Awareness of Privilege. © Quinn Dombrowski. Some rights reserved.
Thus, to be apologetic of the market and to disregard any push for emancipatory change means to abandon this privilege.  And while the general line of argument of people like Segran points to academics’ need to identify with “the general population at large,” it, in fact, means to neglect the responsibility that comes along with the work we do. When academic work is concerned with questioning the status quo, with criticizing the privatization of education and information in the aim to work against the rule of the market and unfair labor practices, opting out for industry jobs because of “academics’ greater mobility on the job market” is neither the purpose nor is it desirable. 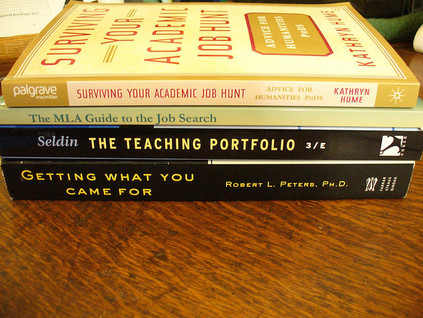 "If you're thinking about going to grad school..." (c) Krista Kennedy.
Yourself, Myself

Such suggestions, therefore, only exemplify the successful internalization of market criteria – in particular that of individualism. It is the focus on “the self” that compromises the ways we think of academic integrity and purpose. Self-promotion for the sake of a job makes us lazy followers who play along in the political games of the academe. We follow standards of methods that keep us from being overtly critical because pushing boundaries into areas of discomfort might have negative effects on the job hunt. By adhering to this mind set, however, we resign to a state of stagnation, and disallow collective agency that might make an impact on current policies.

I agree that PhDs should not be victimized. The solution, however, is not to give into market realities. Instead it is about raising awareness for issues of individual and collective responsibility. This means to leave behind individual comfort zones by applying the resources available in the pursuit of change – not the change of one’s own integrity but of the educational environment. After all, it is not an accomplishment to accept social inequities or to adjust our viewpoints to a system of failure. Instead, we need to rethink why we do the work we do, apply the resources at hand, and view change not as a lip-service but as a social practice.

--Howard Zinn
Opening statement in a debate at Johns Hopkins, later printed in Violence: The Crisis of American Confidence

comments powered by Disqus
Powered by