HELP! George Bush Was a Beatlemaniac!

Latest Snowden Documents Reveal up to 87% of the U.S. Military Budget Between 2001 and 2009 Diverted to Purchase Beatles Memorabilia 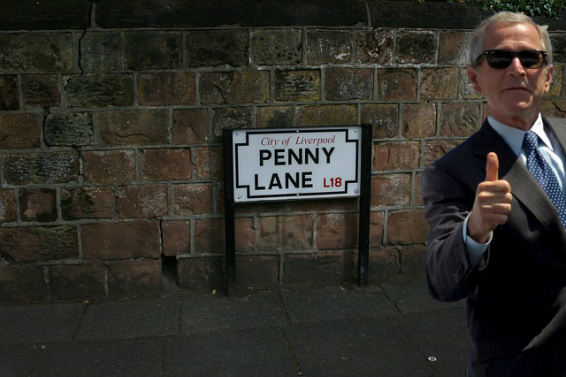 The 2nd Iraq War and the War on Terror were engineered largely to fund President George W. Bush's Beatles collection, says Guardian reporter Glenn Greenwald. According to evidence from documents leaked by Edward Snowden, the 42nd President's little-known passion for Beatles memorabilia, "maybe got a little out of hand" during his eight year presidency. By utilizing the office as Commander In Chief, the US Secret Service, the NSA, and a loose network of foreign operatives, Greenwald alleges then-President Bush orchestrated some of the most aggressive Beatles collecting on record.

According to Stephen Daggett's 2008 report for the Congressional Research Service Report for Congress (RS22926), the average yearly expenditure for US interventions was approximately $809 billion in the period 2001-2008, or an estimated $6.5 trillion directed at direct spending on war.

But the leaked documents paint a different picture. Under the cover of eBay handles Crackerbox_Palace_59  (CP_59) and Decider_In_Chief_42 (DIC_42), George W. Bush was able to access the near-bottomless pit of the US war budget to corner the market on Beatles memorabilia. Using leads found in the documents, and by carefully tracking eBay and Paypal records acquired through a FOIA request, reporters at the Guardian and Washington Post were able to confirm and trace receipts matching approximately 67% of war allocations during those years ($4.3 trillion), though some estimates place his actual purchases up to 20 percentage points higher.

According to those receipts, almost the entirety of those purchases were for Beatles or Beatles-related materials.

While it's difficult to understand how the President was able to keep this "hobby" under wraps while under constant press scrutiny, some propose there was an unspoken agreement among embedded reporters that W's collecting was "off limits," and that anyone caught commenting on his "harmless obsession" would be ejected from the press pool.

In fact, the only reporter on record as raising the subject of Beatlegate with President Bush was veteran White House reporter Helen Thomas in 2003. Bush ignored the question, and Thomas was immediately frozen-out by the President, not to be called on again for three full years.

When he finally did call on Thomas again in 2006 she immediately fired off the now-infamous, "I'd like to ask you, Mr. President. Your decision to invade Iraq has caused the deaths of thousands of Americans and Iraqis, wounds of Americans and Iraqis for a lifetime. Every reason given, publicly at least, has turned out not to be true. My question is: Why did you really want to go to war? From the moment you stepped into the White House, from your Cabinet - your Cabinet officers, intelligence people and so forth - what was your real reason? You have said it wasn't oil - quest for oil - it hasn't been Israel or anything else. What was it? Was it eBay?"

While Thomas continued to push the Bush administration on the relationship between war and memorabilia, she never received a direct response and she was increasingly looked at as a hostile in the press corps. Many link her persistence on this issue to the pressure leading to her eventual resignation from Hearst Newspapers in 2010.

"Yeah, sure, looking back now it's crystal clear," said Ed Chen, former Los Angeles Times and Bloomberg correspondent who covered the White House from 1999 to 2010, "but at the time people just let it be. We knew there was no money for returning soldiers, but no-one really asked why. Or where that money went. I think a lot of weird shit was going on."

The former President's press office still refuses to comment, maintaining total silence on the allegations he misappropriated government funds for ephemera, even in the face of mounting evidence.

Down the Abbey Road

Many of the purchases correlate exactly to the 967 days President Bush's family spent on vacation during his terms. Much of that time, 477 days, was spent at Camp David where an anonymous source from inside the president's security detail says, "the internet there totally rocked. You wouldn't believe the speeds. He probably could have sniped any bid he wanted."  Publicly available travel expenses for trips to and from Camp David track almost exactly with confirmed CP_59 and DIC_42 purchases.

Reporters were also able to demonstrate instances where diplomatic "work trips" such as G-8 conferences coincide with scheduled "pick-up" dates for objects considered too precious to ship or - if the option was offered - the President just wanted to save on postage.

It seems even the infamous "Mission Accomplished" banner was hung, not to announce of the end of combat operations in the Iraq War, but to celebrate the end of a particularly difficult 72-hours of bidding for the purchase of a rare set of Beatles Hummels in mint condition, including the difficult to find, limited-edition Stuart Sutcliffe, Brian Epstein, George Martin, and Yoko Ono figurines. "Most of us didn't even believe the Sutcliffe existed," said Pepper Sargent, a man generally considered to own the world's second-greatest Beatles collection, "and then I was watching the 2004 State of the Union Address and there it was, a mint Sutcliffe in it's original box! Right on his desk! I'm thinking, 'Damn! Who'd he have to kill to get THAT thing?' Well, now we know."

The additional 490 vacation days were spent on his ranch in Crawford, TX where it is believed to keep the majority of his collection, including rarities like the 1981 Alpha Industries "John Lennon whiskey decanter," and the only-known complete, gross of promotional, lp-sized "Butcher Cover Matchbooks" complete with working striker and 40 authentic removable matches.

Employees at the Congressional Budget Office (CBO) have mixed reactions to the findings. "At least now we have answers. Sure, there was a war on, and nobody expected these funds to go toward a warehouse full of sealed copies of Ringo's lp, 'Goodnight Vienna,'" said forensic accountant Stanley Panenka. "but at least this explains why soldiers had to pay out-of-pocket for body armor. The money simply wasn't there. And at least it's the Beatles, not like that mess with Carter and the Cabbage Patch Dolls back in '78"

Panenka isn't the only one to recognize that the Bush collection has a possible sliver lining. Confiscated items are being evaluated and those considered suitable for use in combat will be given over to the military, with the rest sold at auction to fund other government programs. The Pentagon expects to recover as much as $2.7 trillion from the sale, and a low of $68.47 depending on bidding. Or as Greenwald says, "Still more than the average return on most U.S. military interventions."